Restrepo is the first documentary reviewed on this blog (and hopefully not the last) but is worth discussing due to its vigorous storytelling qualities. 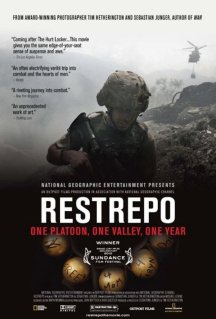 The film documents the most combat-intensive atmosphere known to US soldiers since Vietnam, wherein American soldiers find themselves engaged in 4-5 firefights a day for 15 unbroken months. Transcending the normal objectivity of the format, Restrepo thrusts the viewer into the startling subjective experiences of young soldiers right from the beginning. Illustrated by intense first-hand footage of combat, poignant interviews, and daily losses and gains, the film recreates the surreal daily life of these soldiers. Footage of “boys being boys” punctuated by ghostly silence and heart-stopping combat. What we see in the often unspoken psychological aftermath of war is devastating.

The filmmakers quickly get a bead on what is human and interesting in the story. These men aren’t just soldiers in another American conflict, but youths who barely understand anything about their own world, let alone the incomprehensible foreignness of the world they have been dropped into. To these young men the war is not about ideology, the fight for freedom or any other such lofty goals. It is about surviving in an alien environment they will never understand.

Restrepo is more emotionally intense than any synthetic war movie. At times it is beyond heart-wrenching. It is ultimately compelling. One of the best military documentaries of the decade.