I am a long time lover of short films. Poignant, succinct, and bite-sized, short films allow the viewer to escape into a world of emotion and fantasy for a few minutes at a time. Occasionally I find a rare gem that transcends language and culture to deliver a powerful experience, so today I want to share an eclectic selection with you. There are so many excellent short films out there that I cannot hope to share them all, so here are 10 short films every cinephile needs to see before they die:

Adventure, Animation, Fantasy
An epic bromance made as a graduation film. Read more about The Reward on io9.com or IMDB.

Family, Fantasy
La ballon rouge is about a Parisian boy who finds a sentient balloon that follows him. Read more about The Red Balloon on Wikipedia or IMDB.

Drama, Sci-Fi
In the aftermath of World War III a few survivors attempt to time travel back to a time before the earth was decimated. “The Jetty” is a French experimental film unfortunately I could not find a version with English subtitles. Read more about La Jetée on Wikipedia or IMDB.

Animation, Comedy Link: A claymation short about a man and his intelligent dog who face off against a malicious bank-robbing penguin. The follower trailer hardly does the full short justice. Read more about The Wrong Trousers on Wikipedia or IMDB.

Sci-fi A sleep-deprived office worker accidentally discovers a black hole – and then greed gets the better of him. Although the only free version of The Black Hole is a trailer, you can download the full version at Warpfilmstore.com.

Animation, Comedy, Sci-fiAn Oscar-winning comedy short rife with sci-fi spoofs about a janitor whose dream of becoming a singer comes true. Read more about The Chubbchubbs! on Wikipedia or IMDB. here.

Comedy, Romance Link: [ need to find ] An Oscar-winning short in which Disney proves that they still have some magic up their sleeves and they don’t need Pixar to make it happen. Paperman originally played in theaters at the opening of Wreck-It Ralph (2012). Read more about Paperman on Wikipedia or IMDB.

Comedy An idealistic voter discovers that abstract ideas don’t always match up to reality. Read more about Election Night on Wikipedia or IMDB.

Action/Adventure Although a music video, Bad Motherf*****r is a short film in its own right as well. Watch a James Bond-like hero escape from capture in a blood pumping POV sequence. Like it’s less spectacular prequel, Bad Motherf*****r was filmed using a Go Pro camera. Warning: graphic violence and language. Read more about Bad Mother*****r on Awsm.com or IMDB.

Ichi’s tortured main character is furnished with the uncanny ability to paint any room with a smorgasbord of blood and guts. A sexual dysfunctionary, this weak-minded assassin is the victim of manipulative bullies who push him to avenge a non-existent incident from his past. And while the film plays out as a visual dissertation on sadomasochism, the story is actually about bullying and bullies who, as adults, are fighting for survival among the fiercest criminals of the Shinjuku underworld. The protagonist manages to purge the screen of its many villains in a disappointingly anti-climactic conclusion.

Before the Hunger Games (2012) there was a grossly popular Japanese film by director Kinji Fukasaku called Battle Royale (2000). 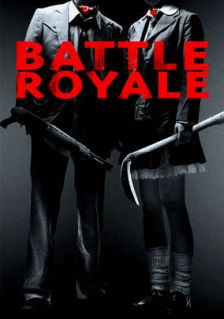 Delivered in typical overdramatic Japanese style, Battle Royale is unlike any film known in Western cinema. Fukasaku blends beauty and brutality as we witness the innocence of youth corrupted with the ultimate need for survival, kill or be killed. With a death (or two) in every scene, this rapidly-paced narrative holds the sanctity of life as forfeit for each and every one of its multitudinous characters, who attempt a surprising array of tactics to kill, survive, or thwart the system in which they are trapped. All the social mores and pretensions of junior high school are replaced by love, loyalty, and raw fight-or-flight animal instinct.

The gems in this story are its intelligently characterized inhabitants, especially the teacher-turned-gamesmaster, Kitano-sensei. Through his character we see tragic, jaded adults devouring the lives of unblemished youth, especially the main characters, Shuya Nanahara and Noriko Nakagawa, previously ignorant of the horrors of adulthood and disappointment.

Battle Royale’s plot fails to pursue a few red herrings which warrant further development, although this failure does not hinder the plot much, mostly because their elaboration would impinge on the rigorous pacing of the main story.

Although the over-the-top acting may be a turnoff to some, if you approach Kinji Fukasaku’s Battle Royale with open mind, it may just surprise you with its juxtaposition of tenderness and violence, desperation and sacrifice, and ultimately, its human core.