The Shadow of the Torturer is a science fantasy novel written by Gene Wolfe. A favorite among fantasy fans for decades and the first in the series The Book of the New Sun, it is usually forgotten in lieu of its later descendants…and for good reason.

Shadow’s only saving grace is its highly literary writing style which is polished and masterfully executed. However, that is the only good thing to be said about this book. This reviewer can’t help but wond 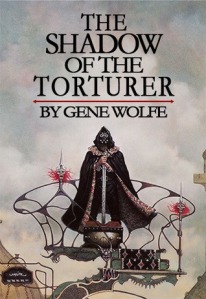 er how many people were blinded into thinking this book belongs on the shelf of greatness due to its excellent writing style and not for its merits of storytelling, of which mastery is entirely absent. In fact, the technical elements of the story are so poorly handled that it feels written by a first time amateur who doesn’t know what he is doing.

The Shadow of the Torturer starts with the idea that an insular guild of torturers produce sheltered individuals who do poorly when dealing with reality and the outside world. But that’s as far as the story goes with it. From there, the plot devolves into a masturbatory wandering through a directionless plot that has little to do with the story’s setup. Its gimmicky ending cuts the story off mid-action without ever deciding what the story is going to be about or without any type of conclusion. The only connective tissue between the first and second parts of the story is a long-winded setup for the explosive mess that follows it.

Exposition is delivered in an unskilled, forced manner. World-building lore and history rarely pertains to the plot or the events at hand. At one point the main character asks his companion if she would like to hear a story and she turns him down, so he TELLS IT ANYWAY. OUT LOUD. TO HIMSELF.

The world in which the story is set is simple, inorganic and incomplete to the point that it is difficult to get a grasp on its sociological elements. Its neatly containered societies are too neat and easy, the cultures being completely non-present in day-to-day life. The author introduces new concepts seemingly to just introduce them. Rarely do these concepts become relevant to the story and even more rarely do their setups have any payoffs.

Although several thematic elements establish themselves early—presumably for a thoughtful exploration later on— no such examination ever takes place. Even the title, The Shadow of the Torturer, promises a wealth of thematic material as a central spine but fails to deliver in any form.

What passes for characters in Shadow are more akin to two-dimensional sheets of gray paper than actual living, breathing beings. Their complete lack of depth or imagination can be seen in the way they react like vague clichés of characters borrowed from the 1940s pulp era. And while several characters are presented with interesting setups, none of their story arcs ever deliver a meaningful payoff.

The main character is the only exception to the rule. His inner emotional life is visceral and effective, and certain details of his person add interesting dimensions to his character, such as his perfect memory. But ultimately even these facets of his character serve no purpose in advancing or enriching the story.

The protagonist lacks a strong motivation or drive to seek his goal. He spends most of his time falling into the company of characters unrelated to the main through-line and letting them direct him from one pointless task to another, consuming nearly two-thirds of the book in nonsense shenanigans and depriving the reader of a more substantial experience. Finally, most (if not all) of the inter-character relationships play out to like juvenile wish fulfillment subplots of the protagonist, and not relationships of believability or value.

Granted, The Shadow of the Torturer is the first book in a cycle of four, all of which were written and completed before Shadow was published, so many of the issues that arise in the first book are likely (read: hopefully) addressed in others. In fact, the vast majority of the fanatical acclaim associated Shadow groups it with other books from the series and not as a standalone. However, being part of an award-winning series does not excuse the story from lacking the basic ability to stand on its own.

The Shadow of the Torturer has received much praise over the years. It is sad to think that such a poorly-crafted novel has been so lauded, as if the genres of fantasy, science fantasy and speculative fiction were so sorely lacking for quality content that Shadow stands above the rest as a mark of excellence. It is also interesting to note that while the book is worshiped as sacred and sacrosanct, seldom do adherents actually say WHAT is so good about it, probably because evidence is remarkably scant.

An interesting read for the curious mind and perhaps of significant importance to those willing to read the entire series, but for this reader the experience was nothing less than infuriating.