Rewriting is difficult. It’s daunting. It can be overwhelming.  And every writer has been there.

Rewriting (also called “editing”) is a different skill from writing with its own set of techniques. While the initial writing process utilizes many of your instinctual and emotional creative energies, the rewriting process taps into a separate part of your brain, making use of your logical and analytical acumen. No matter which way you approach rewriting, it is still mentally taxing and a lot of hard work. 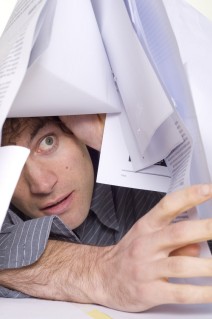 To help you through this brain intensive process we are going to bring you a series of powerful rewriting tools, the first of which is called the Laundry List. The Laundry List is a “to-do” list of items that need work in your current draft, allowing you to organize and address each issue with surgical precision and without becoming lost or sidetracked.

Now let’s break it down:

Step back, let it sit.
You’ve just finished the colossal task of completing a draft and you are feeling on top of the world. Your head is still awhirl with the details as you enjoy a self-congratulatory pat on the back. Don’t jump into rewriting yet. Leave it alone for a few weeks, possibly a few months (3-6 months at most).

Reread it from beginning to end.
Now you can return to your draft with a fresh set of eyes. Dust off the old manuscript and reread the entire piece from beginning to end without stopping to rewrite. Allow yourself to make a few notes along the way but don’t start the actual rewriting process until you have finished your read-through. This will re-familiarize you with the material as work your way through the next step.

Make a to-do list.
Read the piece again, this time making a to-do list of every item, big or small, that needs addressed. Be sure to designate which issues are major and which of those are minor. How you organize your list is up to you, but here are a few suggestions:

Rewrite with purpose.
Each item of your laundry list gives you a clear, reasonable goal to work toward and will keep you from becoming overwhelmed. As you tackle each issue only work on one item at a time, no matter how tempting it is to do more. It’s very easy get sidetracked and lost if you don’t stick to your goal.

Start with the big things, end with the small things.
Address major issues first. The bigger, the better. You can go smaller from there. By fixing the major issues you will probably eliminate some of the smaller points on your laundry list and save the unnecessary stress and hair loss of having to cut minor rewrites that have become irrelevant during subsequent revisions of major points. Things like dialogue polishes and punctuation, vocabulary, etc. should be saved for last.

And voila! You have just completed a thorough rewriting of your piece. It takes some work, but by diligently chipping away at your lump of raw material bit by bit until you have your very own Statue of David left in its place. So the next time you are thinking about jumping into the editorial pool start by making yourself a Laundry List and soon you will be on the road to rewriting your next masterpiece.

Until next time, bon courage and keep writing!

One thought on “Powerful Rewriting Tools #1: The Laundry List”